Final stretch of the season

Final stretch of the season 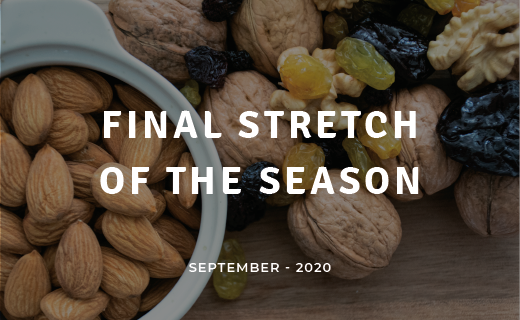 The last quarter of the year is the period where the highest volumes of our fruits are consumed worldwide. While in the southern hemisphere we are in the final stretch of our season, in the northern hemisphere new crops are approaching. In this context, it is interesting to take a look to the different origins to see how some of us are ending and others are starting their seasons.

The latest estimations shows that in Chile up to date, about 83% of the available volume has already been committed, the balance to be sold is concentrated in Large & Medium Pieces from all colors.

The shipments of the season (April / July) have been 27% lower than the same period of the previous season, the decrease is mainly explained by the drop in shipments of inshell walnut.

Relative to climatological factors it’s being a rainy winter, much more than previous years; which gives us some confidence for the coming season, but does not reverse the drought scenario we are experiencing. On the other hand, we are monitoring the cold-hours that up to date are lower to what we need for a good blooming.

For the next season, if everything develops under normal conditions (availability of water, flowering, others) we expect a harvest close to 160,000 tons, being unlikely to end up with ending stock given the progress in existing sales.

In California, packers declare to be sold over 90% without going into much detail on the exact number, but they are already offering products and prices for the 2020/2021 season.

Last week the USDA released the objective harvest estimation on 780,000 tons; 19% above the 2019 harvest. This large volume added to an ending stock greater than usual will undoubtedly have an impact on the development of the season.

On behalf of the clients; They tell us that they have almost end their purchases this year from Chile and what will come in the future are rather spot businesses depending on the demand in the last quarter and the competitive position compared to the American supply.

This year the sales of prunes have been driven by a low harvest volume and bigger sizes than a normal year. Today Chile has sold between 80% and 85% of the total available volume and the balance to be sold is basically in large sizes (30/40 and 40/50).

Regarding shipments to date, in absolute terms we are similar to the previous year, but as this have been a smaller season we can say, the season has progressed faster and this year will probably end without ending stock.

It is still early to project the next prunes harvest, mainly because the uncertain of fresh fruit volume to be exported. The climatic conditions have been favorable except for the cold-hours that have been less than desired and if it is maintained it could affect the uniformity of the final product.

With regard to the American harvest, the estimation is that they would be similar than last year, around 70,000 to 80,000 short tons (63,000-72,000 metric tons), if so, and considering the impact of the sales of fresh prunes from Chile we think that we will face next season with short product availability to serve our customers.

This season Argentina also had a reduced harvest (15,000 tons) and as Chile with big sizes.

Given this new reality in the southern hemisphere, we could foresee that next season we will not have a large availability of small sizes and prices between sizes should be more homogeneous than it has been in previous seasons.

Probably, raisins have been the most affected by COVID due the significant percentage of this fruit that ends in the industry (bakeries, restaurants, hotels, among others) rather than in direct consumption by supermarkets (snacks).

The progress of sales from Chile are similar with last year, however shipments have been slower due to request of some customers to postpone their shipments for the last 3 months of the year.

Between January – June 2020, we have shipped 17% less fruit than in the same period last year. With June being the month with the largest drop (-29%). However, it is important to consider that this year, as a result of the drought, there is less fruit available, around 15-20% less than in 2019.

Regarding the next harvest, it is still early to give a figure, but we consider that if we maintain the right conditions, Chile should return to the potential production of 65,000 tons that Chile allocates annually.

In South Africa, according to the first estimations, it is expected to have a harvest close to 88,000 MT, this harvest volume assumes normal climatic conditions for spring and summer.

In recent years, South Africa has invested heavily to increase its production capacity, so we expect the volume is increase in the coming years.

Nowadays in Turkey harvest is taking place (there are still about 2 weeks left) and they have faced certain difficulties completing the tasks because the lack of workers due to COVID. The official harvest estimation was recently published at 271,000 tons and the government, with their Support Program, announce a purchase price to growers equivalent to USD 1.70 / KG for a volume of 50,000 tons.

Despite the official estimation, in our conversations with local exporters, they told us that the actual volume should be closer to 300,000 tons. If we analyze the sales of recent years, the local market consumes about 40,000 tons and annual exports are around 260,000 tons, so this volume of 300,000 tons would be in absolute balance with their demand. If, the harvest is indeed 271,000 tons, they will face a shortage of product exacerbated by the purchase of 50,000 tons committed by the government.

The Chilean almond; Despite the rise in world production, it has had a stable and positive demand. Up to date, Chile has sold around 90%, which is not a small merit considering the volume available in the US and the markets where Chilean almonds are usually sold; Russia, Brazil, Argentina, Ecuador where we have preferential tariff conditions but where COVID had hit hard.

Shipments between January and June have had a significant decrease (-37%) compared to the same period last year, this decrease is also due to the lower available volume that we have this year (-25% lower than the 2019 season). The slow shipments should tend to normalize towards the end of the year since a large ending stock is not expected in this product.

The rains we had this winter were pleasantly received by almond growers in the north-central area of ​​our country, who were very affected by the drought.

The blooming is ending, the temperatures haven’t been the optimal for a good bee pollination, so the volume for next season remains to be seen. The historical average is near 11,500 tons in Chile for this fruit.

We’ve had many news from California about the record crop expected; 3.00-billion-pound (+ 18% over the previous season). This growth is no longer a surprise, since it was expected for a long time and prices have been internalizing it since the beginning of the year.

The US shipments have remained on the rise, breaking record after record. Demand remains firm and packers are confident in the capacity of this market, where a movement in prices makes demand react quickly.

Without a doubt, selling the large volume of Almonds that California will have next season implies a challenge, but among all the “tree nuts”, the almond is probably the one with the greatest development and diversity of uses to achieve it.